One week yacht cruise in the Kekova region

The blue cruise is the name given to boat trips in this part of the Aegean. Join us for this trip from Kaş in Turkey on our yacht and you’ll soon find out why, whether you book the whole boat for a group of family or friends or join an existing group as an individual or couple.

Take a day to look around Kaş before boarding the gulet in mid-afternoon. This bustling harbour town is small enough to explore on foot, but has plenty to offer in the way of shops, cafes and bars. Once on board, your hosts will go through the itinerary for the cruise and answer any questions, in addition to rustling up an evening meal for you.

After breakfast, or before if you’re really keen to get going, we’ll set off for Hidayet Bay on the Cükürbag peninsula, where we’ll have lunch. Swim or snorkel in the clear waters, or relax in the shade of the olive trees with tea and Turkish pancakes. Fırnaz Bay, our overnight stop, is also ideal for snorkelling, as well as scuba diving. 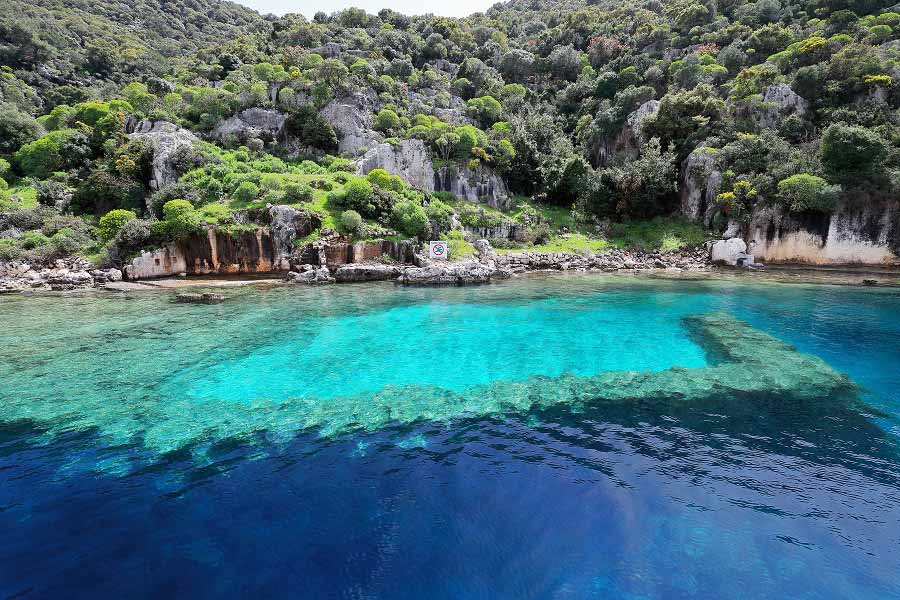 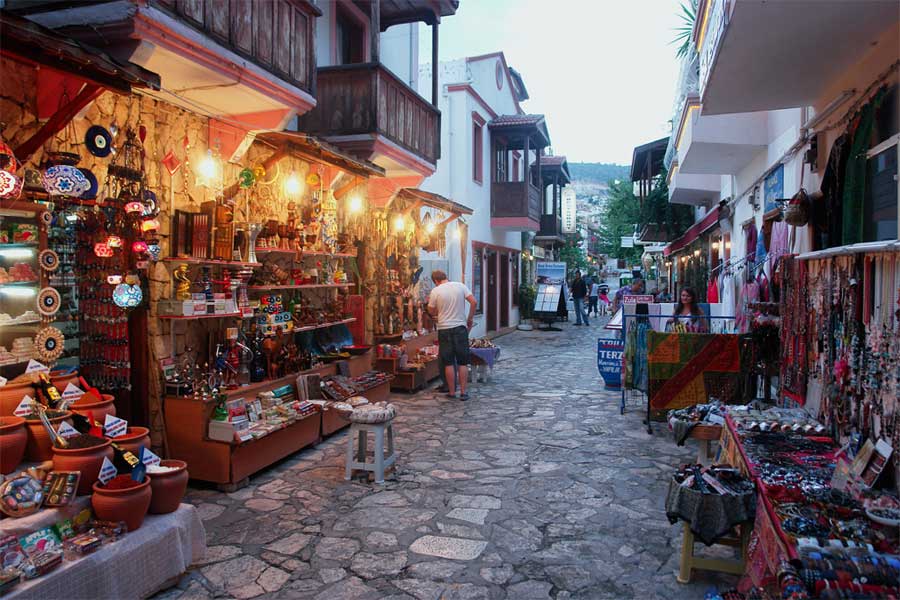 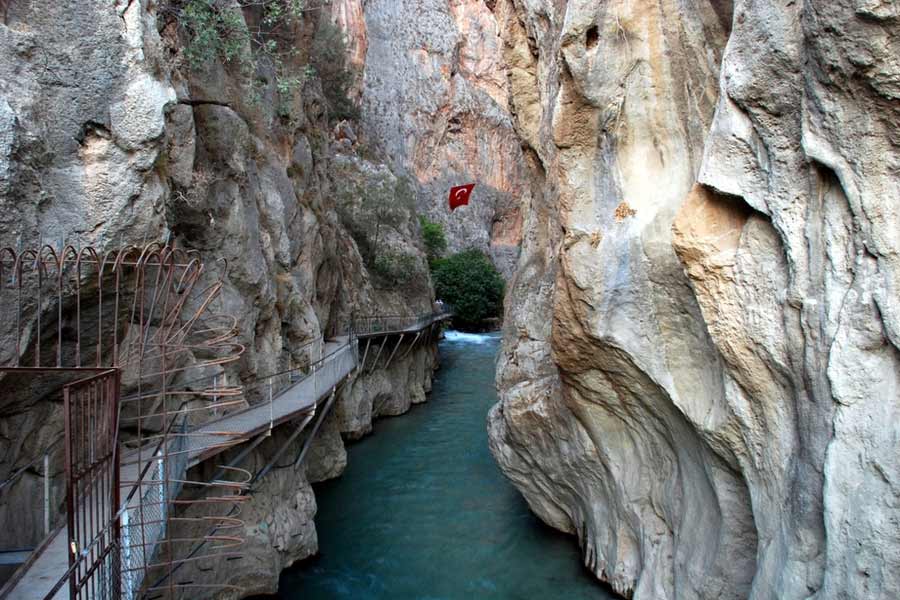 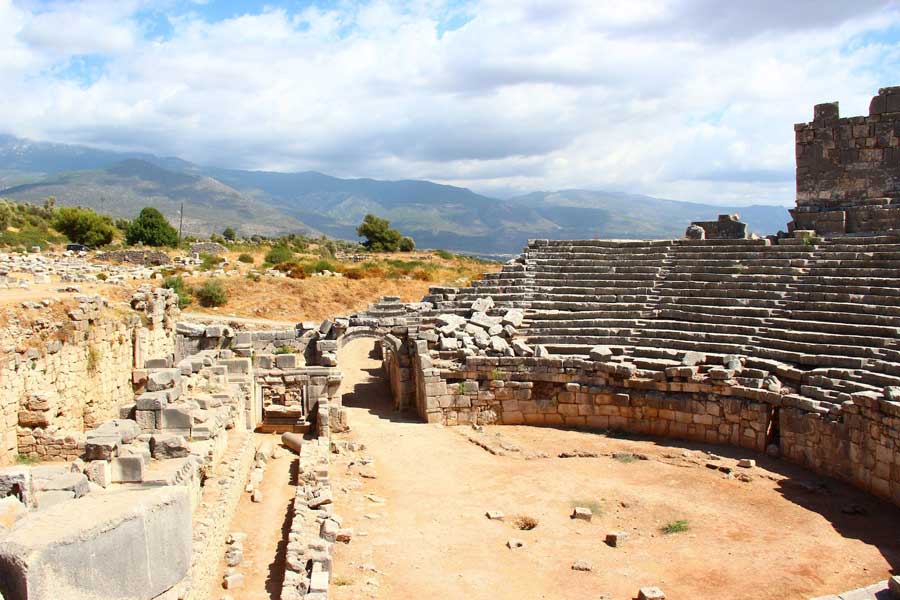 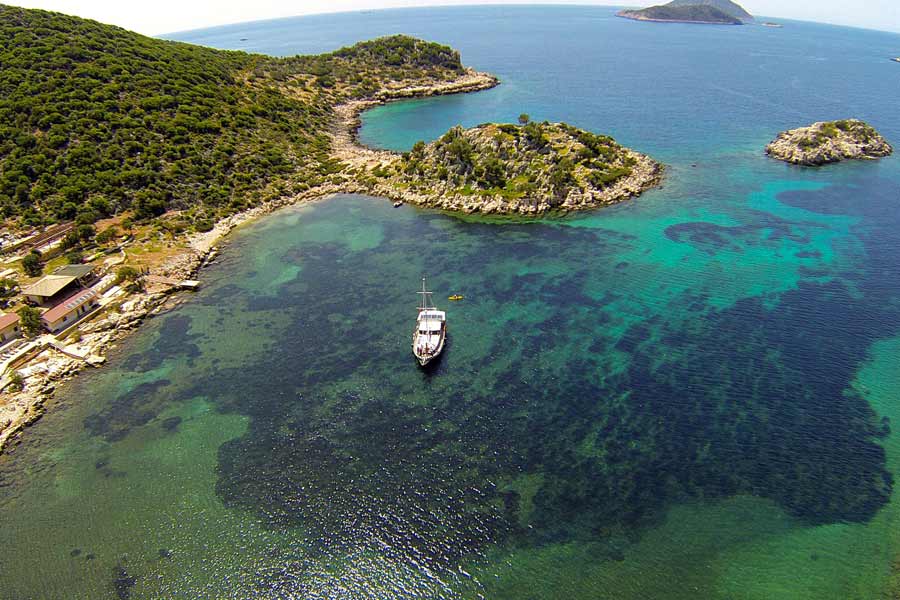 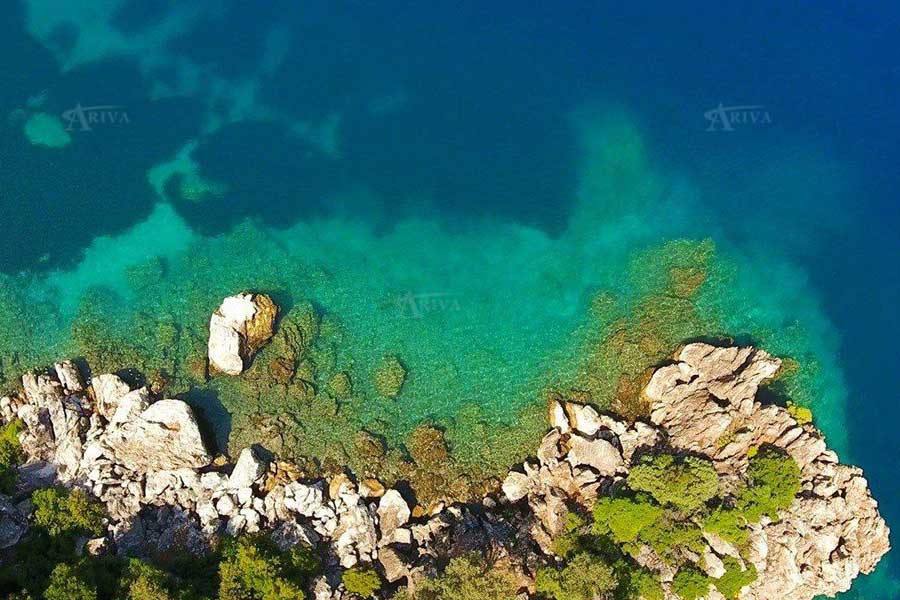 On Day Three we’ll visit Kalkan. The shops and open-air restaurants here can easily occupy you all day, but if you fancy a change, you can hire a car and visit some of the local attractions. There are Lycian ruins at Patara and Xanthos, while the spectacular Saklıkent Gorge is the second longest in Europe. Don’t miss the boat, though – after lunch we’re moving on to Ufakdere, uninhabited except for a few goats, followed by the remote and rocky Inönü Bay for the night.

Aquarium Bay, where we’ll stop on Day Four, is named for the rich variety of sea life found in its waters. Take a snorkel and see how many different kinds of fish you can spot! Alternatively, look for Roman ruins on the islands to either side of the channel. We’ll reach Kocakarı Bay, our peaceful haven for the night, in plenty of time to watch the sun go down, perhaps while enjoying a glass of something.

The next day takes us to one of the most famous tourist attractions in the area, the Sunken City at Simena. In the second century AD, an earthquake caused houses and harbour to slip under the waves, where their remains and foundations can easily be seen from the deck. Present-day Üçağız is a pretty village nestled on the side of a hill, offering home-made refreshments to weary hikers along with beautiful views over the bay. After stopping off at Katır Iskelesi, or ‘Mule Bay’, we’ll moor at Gökkaya. This bay is a popular overnight resting-place, with its own open-air nightclub in one of the many inlets. You can also see the cave where pirates once hid their treasure for safe-keeping. 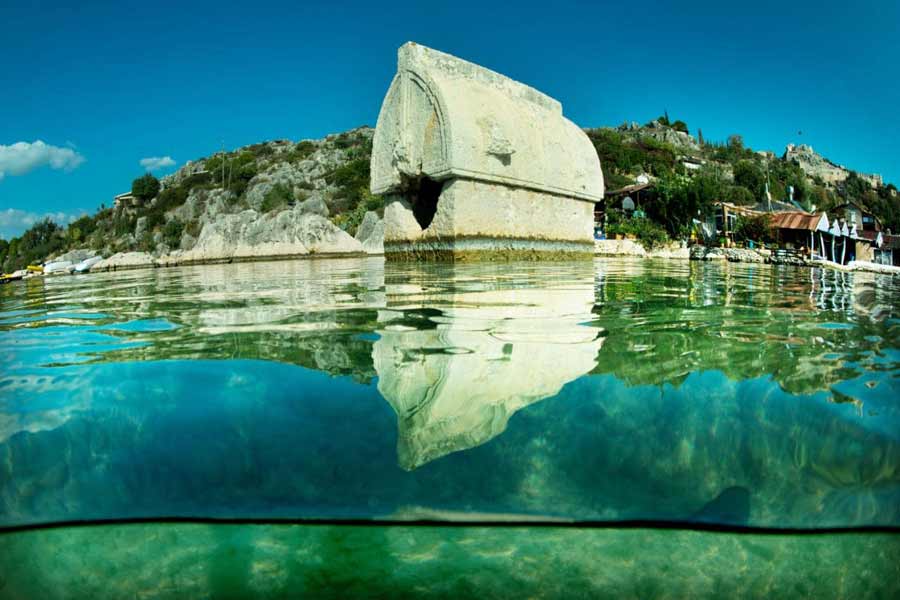 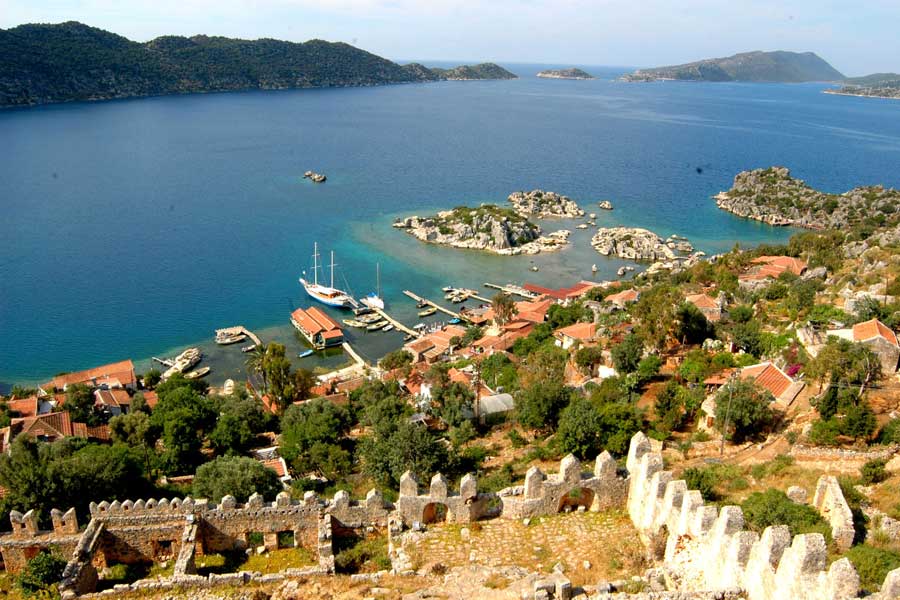 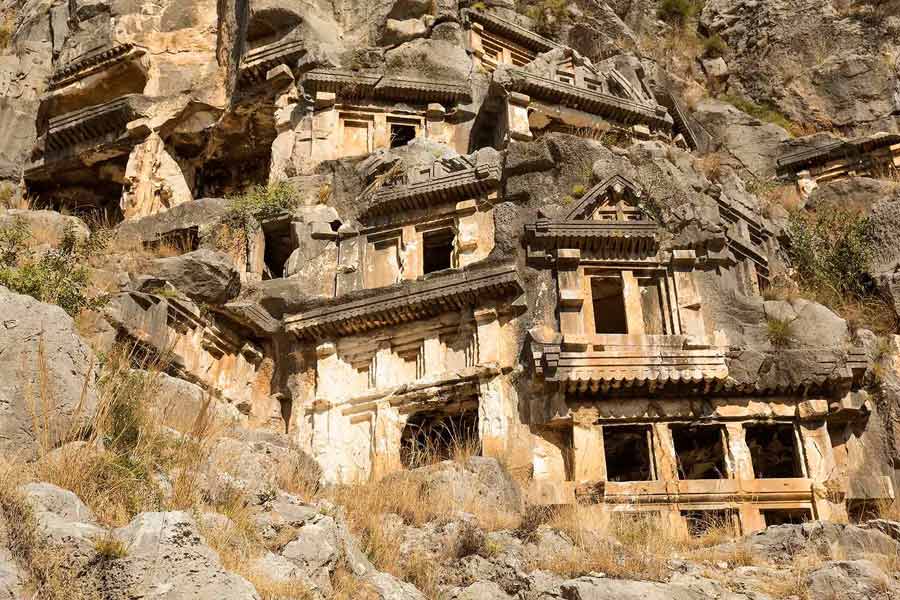 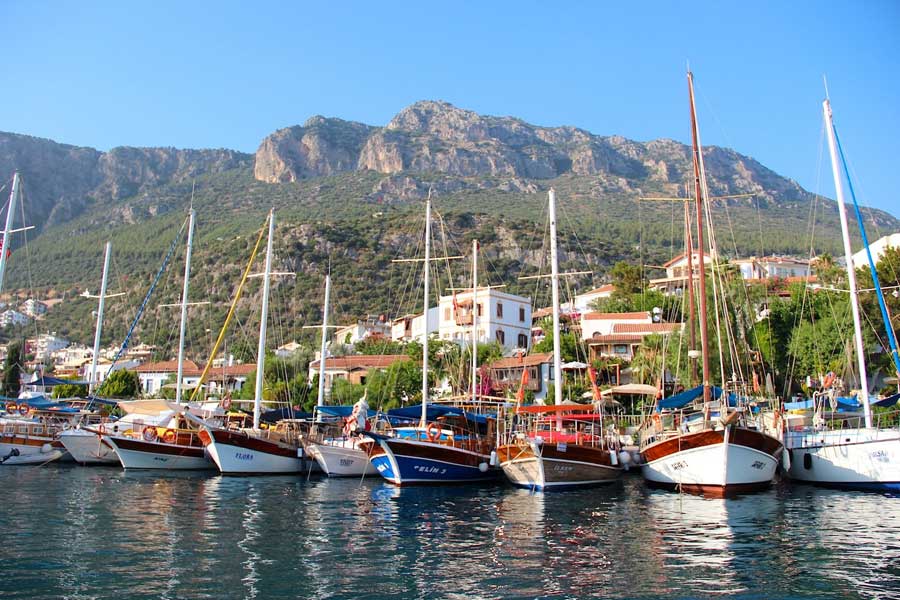 The choice is yours on Day 6. We can take you to Myra, with its tombs cut from the rock and its church dedicated to Saint Nicholas, the model for Father Christmas, who lived and worked here. If you’d prefer a more leisurely morning, let us pick out a bay for swimming or sunbathing. Then we’ll retrace our route to visit Tersane Bay with its Roman and Lycian ruins before putting in at tranquil Kumlu Iskele for the night.

Making the most of your last full day, we’ll stop at the pretty Kuvan Islands for lunch and a swim before heading to Limanagzı Bay, overlooked by ancient tombs. Kaş, our starting and finishing point, is visible across the bay. We’ll return in the evening or early the following morning, bringing the tour to an end with a last breakfast on board.

For rates and availability, or any other questions, send us a quick message.

Discover our peaceful family-run pension on the waterfront in a beautiful unique setting.

Designed and hosted by AE Teknoloji